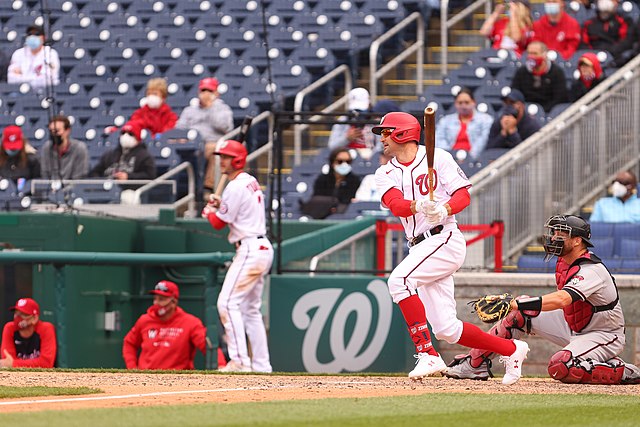 When looking at the top-five hitters of the Nationals all time home run leaders, there are plenty of legends present. Three of the five are enshrined in Cooperstown, but none of the Hall of Famers own the top spot. In fact, the top five only feature players who appeared when the franchise was north of the border as the Montreal Expos…except for the all-time franchise home run leader.

We’ll go into detail about each of Washington’s five most powerful hitters before detailing the remainder of the top 20.

Ryan Zimmernan’s nickname is “Mr. National”, and that couldn’t be more perfect for the former infielder. He was the organization’s first draft pick after moving to the nation’s capital. That was in the 2005 MLB Draft, when Zimmerman was selected with the fourth overall pick. He also hit a walk-off home run in the Nationals’ first game in their new ballpark.

Zimmerman was pretty good in many other instances for the Nats, too. During his 16-year career (all with Washington), the right-handed hitter posted seven seasons of 20-plus home runs.

This performance led to his second and final All-Star Game selection, as well as down-ballot MVP votes (he finished 20th).

Affiliate Link: Get Official Nationals Gear at the MLB Shop

Vladimir Guerrero got knocked off the top spot of the Nationals/Expos career home run leaders list, but he’s still heavily featured on the single-season leaderboard. So, that combined with still being second all-time in franchise history for his Expos career will likely suffice for the Hall of Famer.

Guerrero’s first full season with the Expos came in 1998. He proceeded to appear in at least 154 games each year from 1998-02. All that opportunity led to some ridiculous numbers. He finished with 30-plus homers and 100-plus RBI in each campaign. But wait — there’s more.

The outfielder’s numbers during this span included a .326/.391/.602 line while averaging 39 homers, 37 doubles, 116 RBI, and 105 runs scored. He went to the All-Star Game four times while winning three Silver Sluggers and finishing within the top-15 of NL MVP voting four times.

What’s more eye-opening about this period was the stolen bases Guerrero racked up. He averaged 22 steals per year, with most coming in 2001 and 2002. The outfielder added 30-plus steals in each campaign. He finished with 40 in 2002 and just barely missed becoming a member of the 40-40 club after pairing that with 39 homers.

Andre Dawson won his only MVP Award as a member of the Chicago Cubs in 1987. Before that, though, he had a couple of close calls during his 11-year run with the Expos from 1976-86. The outfielder won six straight Gold Glove Awards and four straight Silver Sluggers during his tenure, which included seven seasons of at least 20 home runs.

Another interesting wrinkle about this performance included him playing much better on the road than at home. In Montreal, Dawson posted a .777 OPS with 10 homers and 42 RBI in 336 plate appearances. As a visiting player, he finished with a .966 OPS, as well as 22 homers and 71 RBI in 362 plate appearances.

Tim Wallach spent 13 of his 17 big-league seasons in Montreal. He put together some solid performances, but he mostly found his way onto this list by being a steady contributor every year.

The infielder was selected to five All-Star Games and won three Gold Gloves for his work in the field. There were two occasions where he finished within the top-10 of NL MVP voting: fourth in 1987 and 10th in 1990. The .858 OPS he posted in ’87 was the second-highest of his career (he finished with a .859 OPS in 1994). His 26 homers were also the second-most in a single season for his career, and it was one of five times he surpassed 20.

The 123 RBI he compiled was the only time Wallach surpassed the century mark in one year. Along with hitting a league-leading 42 doubles, he slashed .298/.343/.514 for Montreal in 644 plate appearances. By the end of April, Wallach had only hit one homer through his first 63 plate appearances. He then hit at least five in each of the four months that followed (five in each of May, June, and July, along with six in August).

Gary Carter didn’t win his lone World Series title until 1986 with the New York Mets. But by the time he arrived in Queens in 1985, he was already an established star thanks to his work with the Expos.

The Hall of Fame backstop enjoyed nine seasons of 20-plus homers. On two different occasions, he rattled off a streak of four straight years surpassing that number. The first time it happened was from 1977-80. The streak began with his first season of 30-plus homers, and it ended with his first 100-plus RBI performance.

During this stretch of 2,378 plate appearances, Carter slashed .271/.340/.479 while averaging 26 homers, 27 doubles, 83 RBI, and 79 runs scored. He never played in fewer than 140 games per season and appeared in at least 154 contests in three of the four seasons, all while playing the game’s most physically taxing position.

Carter’s 1980 season also included a Gold Glove Award and a second-place finish in NL MVP voting after posting a .818 OPS with 29 homers and 101 RBI.

Here’s what the remainder of Washington’s top-20 career home run leaderboard looks like at the moment:

To check out which players are on the outside looking in, here’s the full list on FanGraphs.