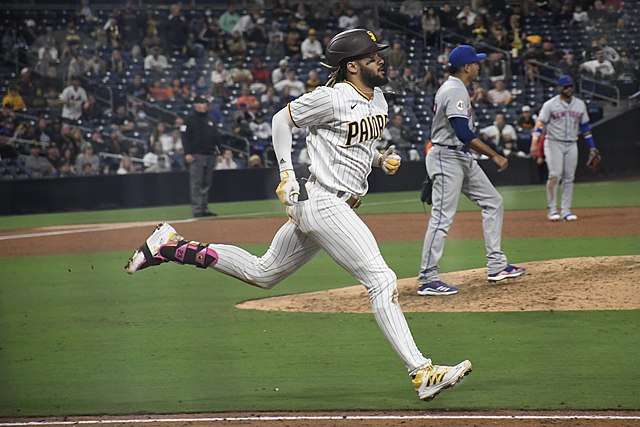 Home runs are more common in today’s MLB game than at any other time in the sport’s history. It’s not just that a bunch of home runs is getting hit on a nightly basis, though — we’re seeing freakin’ moonshots get launched off the bats of some hitters. Thanks to the gloriousness that is Statcast, we can easily find out who hit the longest home run of 2021. And since we shouldn’t stop there, we’ve also included the other homers that cracked the top 10.

Franchy Cordero’s year with the Red Sox wasn’t what he wanted, especially since it was just the second time in his MLB career that he accumulated more than 100 plate appearances. He only hit one homer during 2021, but my goodness did the man make that lone dinger count.

What an absolute bomb, right? It was a feast-or-famine kind of situation for Cordero, as he didn’t hit any other ball further than 361 feet with Boston. One thing that stayed similar to most years for the left-handed hitter is an incredibly high strikeout rate. It settled in at 37.5%, which was the fourth time in five years it’s finished above 35.0%. Unfortunately for 27-year-old, it was easily his worst offensive year as a big leaguer. His yearly wRC+ from 2017 through 2021 looks like this: 81, 104, 134, 94, 32. That’s not the kind of roller coaster any hitter wants to be on.

Entering the year, Cordero had a career fWAR of 0.7. In just 136 plate appearances this past year, he posted a -0.8 mark.

In his final year with the Colorado Rockies before hitting free agency, Trevor Story had an average year at the dish by the looks of his 100 wRC+. His .251/.329/.471 line through 595 plate appearances was good but not great, yet he still accumulated 3.5 fWAR. This also included 24 homers and 75 RBI, which was the fifth time he hit 20-plus dingers with 70-plus RBI in a single season (the only time he didn’t was in 2020, which would’ve been hard to do).

This bomb isn’t exactly foreign to Story. After all, he does have a 500-plus foot tater to his name already. But even when looking at some of his longest homers from 2021, the shortstop launched a baseball at least 460 feet on four different occasions. He saved his 475-foot blast for a last hurrah, too – it happened on September 28th.

The San Diego Padres may have fizzled out over the second half of 2021, but that doesn’t take away from the individual year Fernando Tatís Jr. put together. In his first two seasons (629 plate appearances), he slugged 39 homers with 98 RBI, 27 stolen bases, and 6.6 fWAR. Through 546 plate appearances this past year, those numbers were 42, 97, 25, and 6.1, respectively. He also captured his first — and probably not last — single-season National League home run crown.

The above dinger happened on June 16th against Kyle Freeland, and it was part of a trend for the young shortstop. Tatís slugged three different pitches 460-plus feet in 2021, and each of them had an exit velocity of at least 110 mph. If we expand the sample a bit, the Padres’ superstar had five different balls travel at least 450 feet, which was one for each month of the season (except for July).

While we wait for that, he’ll just keep climbing the Padres’ all-time home run leaderboard quickly.

Ryan McMahon’s offensive production during his age-26 season was technically below average for the Colorado Rockies when looking at his 95 wRC+, but it was still a significant year for him. That wRC+ is a career-high mark, and the 2.5 fWAR he produced was much more than his cumulative fWAR heading into the season (0.7 through parts of four seasons).

He also set single-season career-high marks in RBI (86) and runs scored (80). McMahon’s 23 homers were just shy of tying his previous high-water mark, which was 24 in 2019. For players who call Coors Field home, a lot is obviously said about the hitting conditions at the park, which has notoriously been an offensive haven. For McMahon, though, his production was nearly identical – he hit 12 homers at home and 11 on the road, with his wRC+ in Colorado (94) nearly mirroring what he did as a visiting player (95).

Not surprisingly, this blast off Tyler Mahle on May 15th happened in offensive-friendly Coors Field, and it was the start of a powerful week for the left-handed hitter. After yanking this one out to right field, he hit his second-longest homer of the year six days later: a 457-foot shot off Riley Smith of the Arizona Diamondbacks.

This past season was the first of a four-year, $65 million deal Marcell Ozuna signed following the 2020 campaign to stay with the Atlanta Braves (after he led the NL in home runs), but it hasn’t started how he was hoping it would. The outfielder was limited to 208 plate appearances and 48 games in 2021 because of a finger injury and also for being on administrative leave in conjunction with the league’s domestic violence policy.

In a series against the Chicago Cubs at the end of the month, Ozuna blasted homers of at least 450 feet on consecutive days. First, he slugged a 453-foot dinger against Kyle Hendricks on April 28th before the above 479-foot moonshot on April 29th against Adbert Alzolay.

Oh, man – it’s too bad Ronald Acuña Jr. couldn’t join the Braves in the World Series this year. That dude is born to perform on the sport’s biggest stage. Once he returns from his ACL injury in 2022, though, you better believe he’ll do everything possible to make that happen. That goes for what happens during actual games and during the Home Run Derby, too.

The above homer came during the series against the Cubs we just talked about for Ozuna. However, Acuña’s blast came on April 27th, so Chicago got into a nice rhythm of surrendering one absolute bomb per day against Atlanta. In addition to traveling 480-plus feet, this homer also had an exit velocity of 111.9 mph, which was one of nine times Acuña posted an exit velocity greater than 110 mph on a dinger in 2021.

And let’s not forget that this dude will be just 24 years old by the time Opening Day comes around for 2022.

Duvall was one of a few outfield acquisitions Atlanta made at the trade deadline to make the loss of Acuña not that terrible, and he did exactly what the Braves were hoping he’d do – hit dingers. Of the 38 he slugged last year, 22 came with the Miami Marlins before getting to the Atlanta Braves.

When looking at his Statcast page, though, Duvall nearly had identical numbers on two different homers that happened almost three weeks apart from one another. The above dinger happened on September 20th against Taylor Widener of the Diamondbacks. In addition to the 483 feet it measured, Duvall also produced a 110.6 mph exit velocity with a 30-degree launch angle after pulling a 92.9 mph four-seam fastball. But on September 2nd against Yency Almonte of the Rockies, the right-handed hitter pulled a 94.0 mph four-seamer out to left field at a 30-degree launch angle to go along with a 108.4 mph exit velocity while traveling 477 feet.

Yermín Mercedes only spent 68 games with the White Sox in the big leagues last season, and they couldn’t have been more different. Between April and June, his OPS progression was 1.113, .619, .411, while his wRC+ progression was 204, 72, 16. He legit went from being the hottest hitter on the planet to barely being able to luck his way into a hit.

Baseball is a fickle game. The stress of having that much success followed by such a precipitous dip would get to anyone, which is probably why he briefly thought about retiring. Five of his seven homers took place during his incredible month of April, with the above blast being his second of the year. The April 8th dinger off Brad Keller of the Kansas City Royals traveled 113.3 mph, which was the second-hardest hit ball of his season.

Although he only hit seven homers, he made each one of those bad boys count. They each had an exit velocity of at least 104 mph (with four of them at 110-plus mph). When it comes to distance, he slugged them all at least 420 feet.

Pham put seven balls in play that traveled 400-plus feet during the 2021 season. The only one that went further than 430 feet was the 486-foot blast you can see above. It took place on August 17th against Germán Márquez.

Through his first 58 plate appearances, Sanó hit just two dingers while slashing .111/.310/.244 during the month of April. So, the fact that he still got his season-long totals back up to where most would expect them was quite a feat.

Sanó has constantly been among the league leaders in exit velocity, and 2021 was no different. His 93.4 mph average was among the top three percent in the league, while 12 of his 30 dingers traveled 110.0-plus mph. The slugger’s most powerful plate appearances all came within a month of one another, and each resulted in the ball traveling at least 470 feet.

It started on July 28th when he took Joe Jimenez of the Detroit Tigers deep for a 473-foot blast. He waited a bit before besting that with a 475-foot shot on August 18th against Cleveland’s Zach Plesac before finally hitting the above 495-foot rocket off Nick Pivetta of the Boston Red Sox on August 25th. He’s working his way toward the top-10 on the Twins’ all-time home run list, one mammoth home run at a time.